G’day Travelers! I had the chance to head down to Sydney over the weekend and spend an evening exploring as much of the Vivid festival as I could fit into one night.

Sydney Vivid Festival just keeps getting bigger and bigger every year, and one night is just not enough to see all of it. But I did the best I could to see the main attractions. The Opera House, Circular Quay, Harbour Bridge are Darling Harbour are the key attractions, however the lighting installations expanded this year to include Star City Casino and part of Chatswood in the north of the city.

I started my night over at the Overseas Passenger Terminal. The home to cruise ships when the arrive in Sydney Harbour, the terminal offers a great views of both the Sydney Opera House and Circular Quay. I have to admit that this years projections on the sails of the Opera House weren’t as awe-inspiring as previous years, but that more to do with the bar being set really high in the last couple of years. It was still very impressive to see.

The lights on the boats in the harbour also made for some unique photo opportunities. It was good fun to spend a bit of time taking photos as the crowd started to build up in Circular Quay. 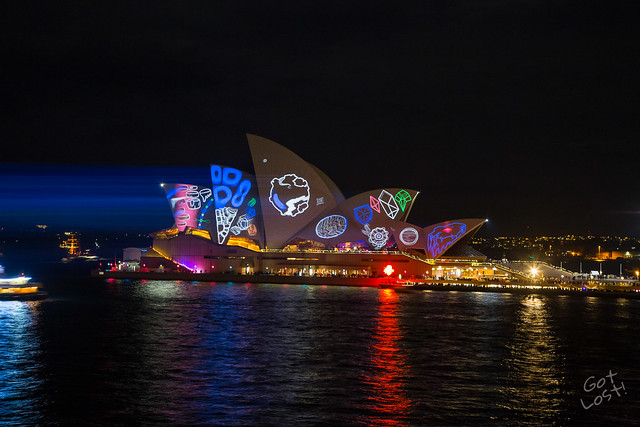 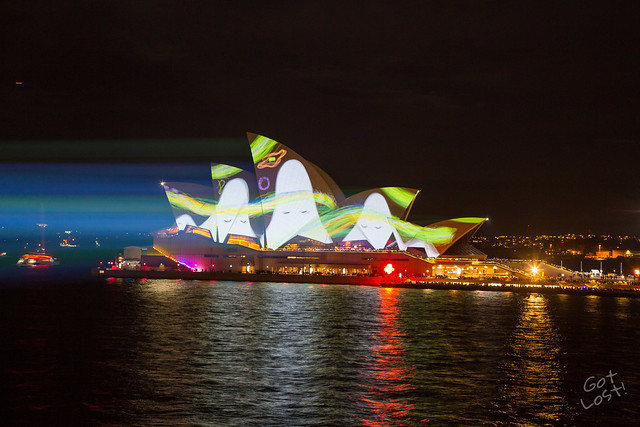 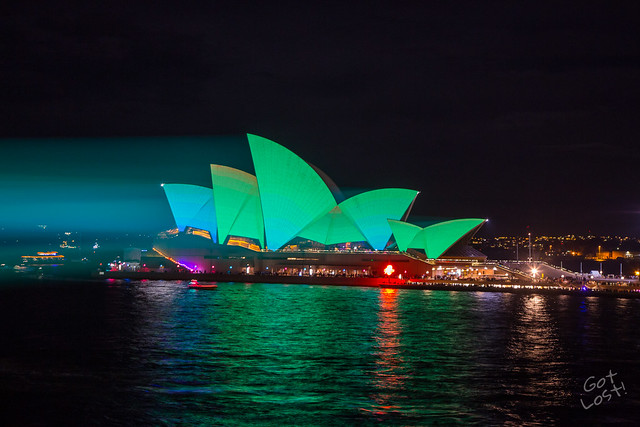 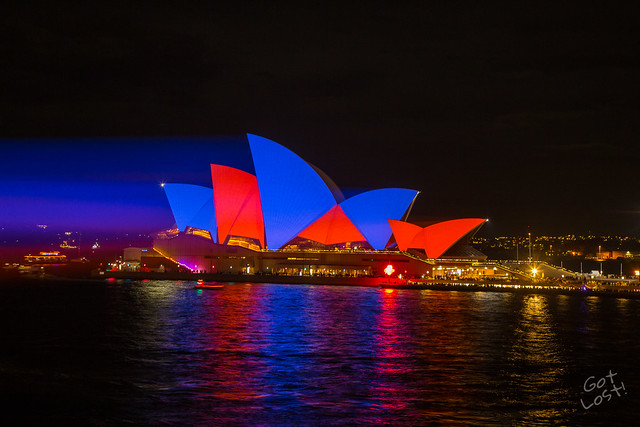 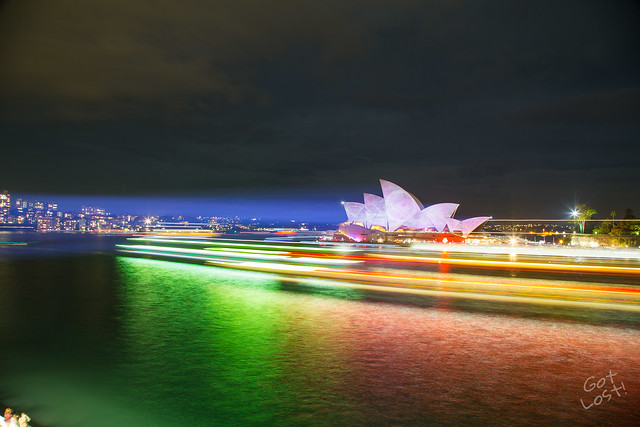 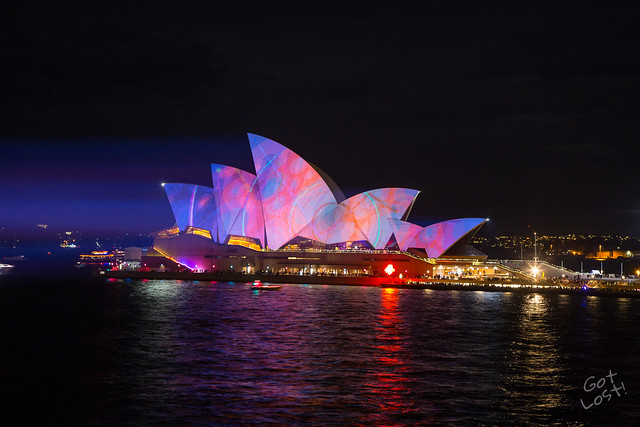 With Circular Quay quite crowded, the next stop of the evening was the The Rocks. But I had seriously under estimated how many people would be out an about on a Saturday night. There were plenty of installations in and around, The Rocks but they were extremely difficult to photograph with the crowds.

However I managed to find the BBC projections underneath the Sydney Harbour Bridge were very impressive. It was good to sit down the middle of the street and watch the projections play out above. It was a good addition to this years Vivid festival. 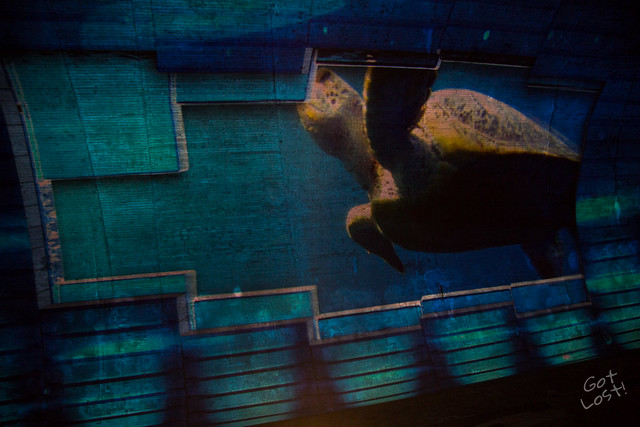 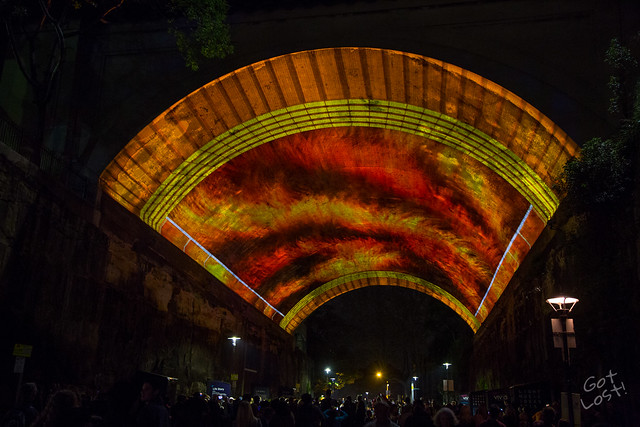 Then it was time to head over to Darling Harbour for the 8:30pm fireworks show. George Street in the city was closed off to traffic so it could be used as a walkway which was impressive to see. As it was definitely needed with thousands of people walking around.

The fireworks at Darling Harbour were part of the laser light and water show, which was absolutely spectacular. I managed to pick out a spot with a great view from above the harbour. Avoiding the worst of the crowds. 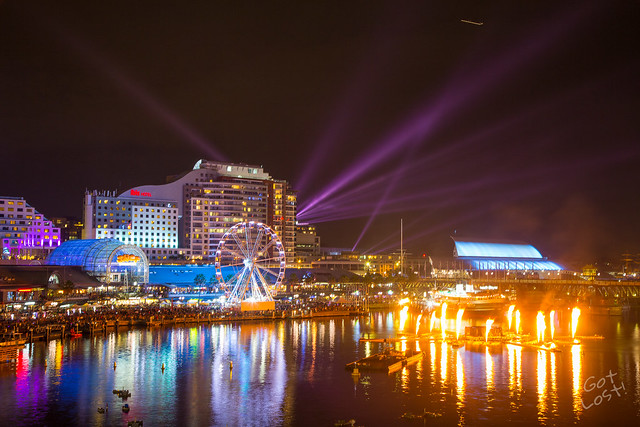 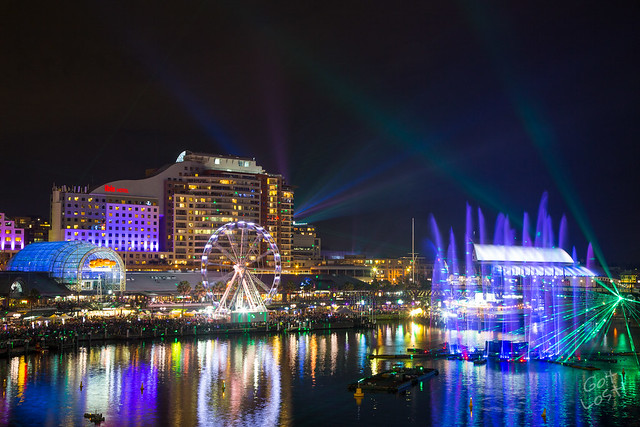 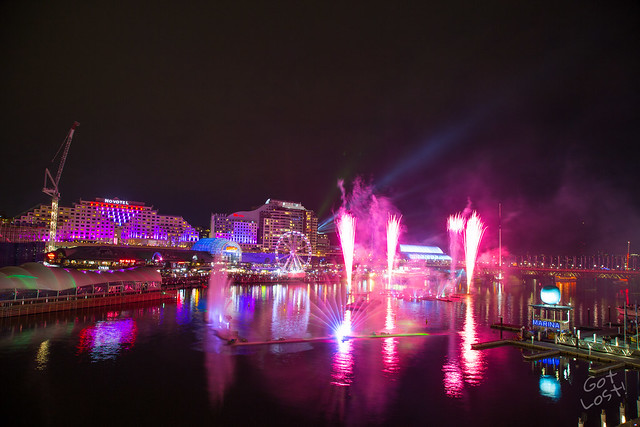 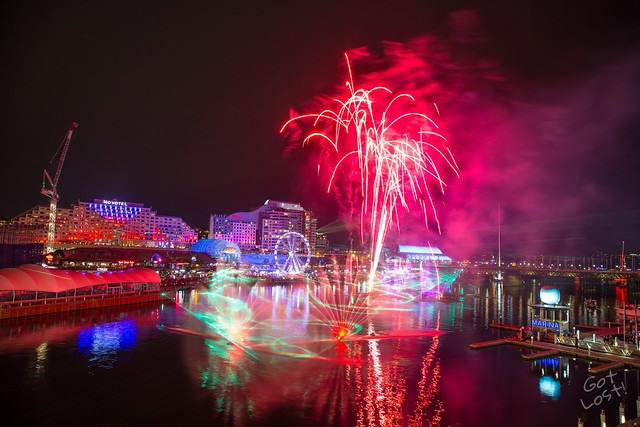 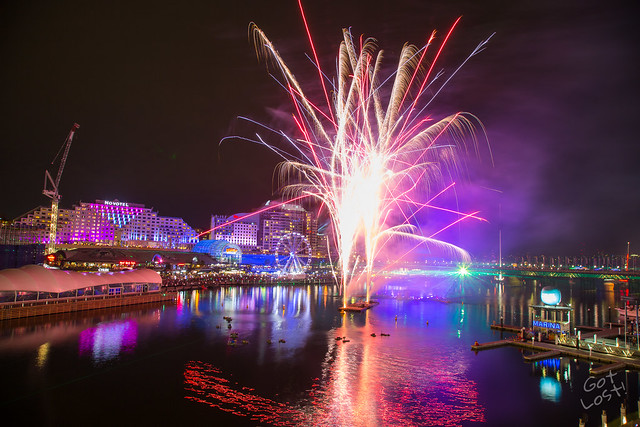 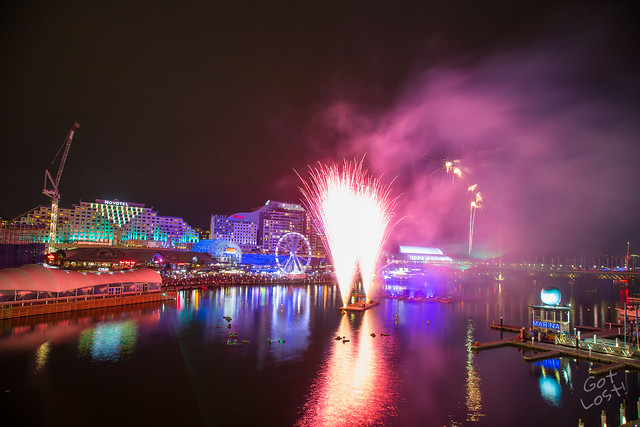 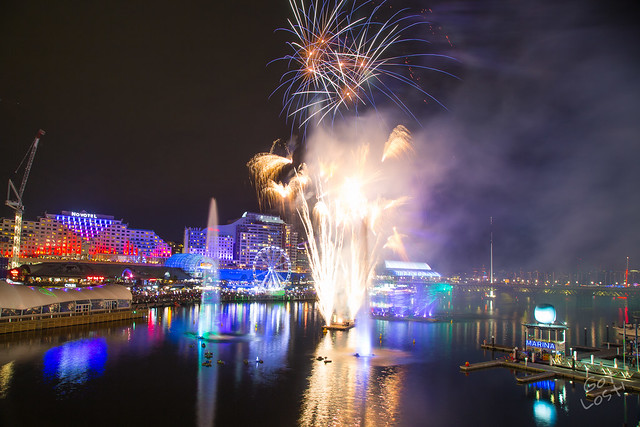 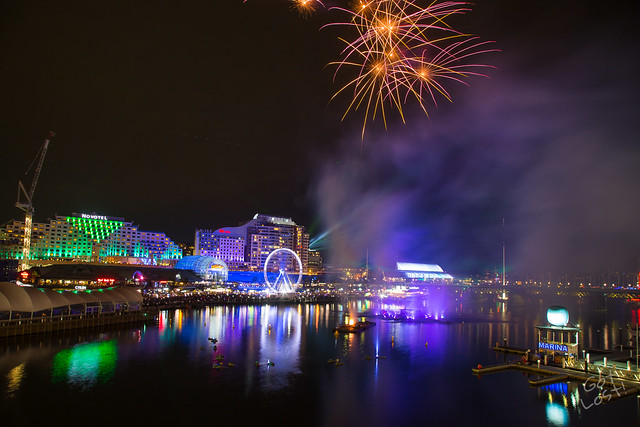 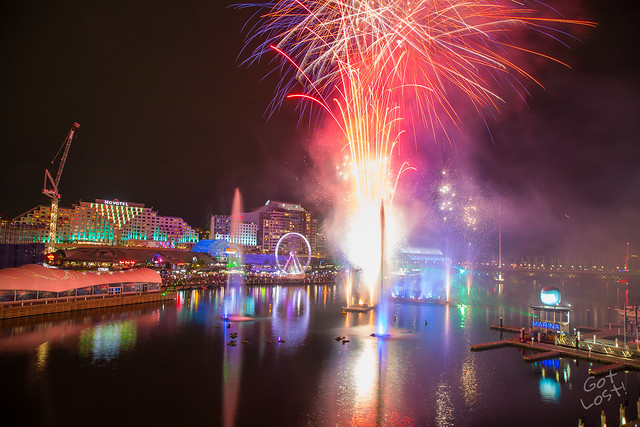 With the crowds being so large, I was going to be hard pressed to see much more of the lighting setup from with in the city. So to finish off the night, I drove over to the northern side of the harbour to photograph the lights on the Sydney Harbour Bridge from Blue Point. 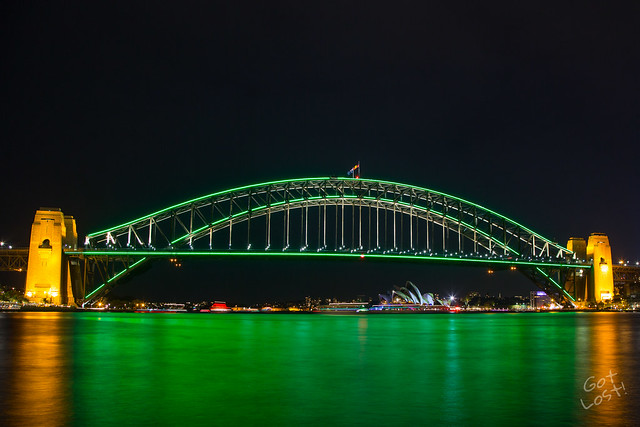 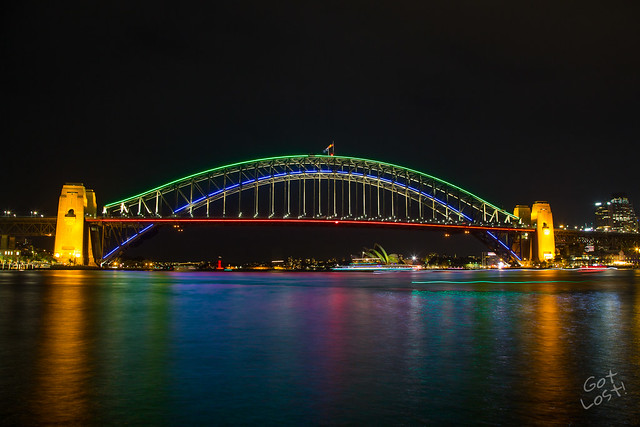 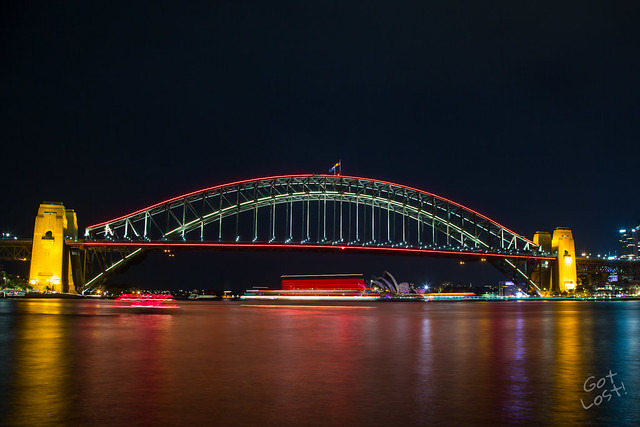 Here’s a quick video I threw together showcasing some of the animations and displays of Vivid Sydney. For more information about Vivid check out – http://www.vividsydney.com/

Did you go to Vivid this year? Let me know your favourite part in a comment below.