G’day Travelers! Last time I went to Perth (you can read about that here) I managed to pack quite a lot into a short amount of time. But I didn’t get into the city to explore the CBD.

On this trip to Perth I was fortunate enough to have a couple of extra days either side of my work commitments (which you can find out more about on my other blog) to explore in and around the city. So I seized the opportunity and headed straight into the city from the airport to check out what the city had to offer.

Fresh off a 5 hour flight I kicked off the morning wandering around the city, getting my bearings, and seeing if I could find anything interesting in the city. I didn’t do a lot of research before heading into the city, but I thought there would be plenty to do around the river, so I headed into the CBD to see what I might find in there instead.

I found a couple of interesting buildings, but not too much that grabbed my attention. I thought there might have been more in the way of old buildings in the city, like Fremantle, but it was mostly newer highrise buildings. All part of the mining boom that built Perth I guess. Here’s a couple of photos I took of some of the more interesting sights I saw wandering around. 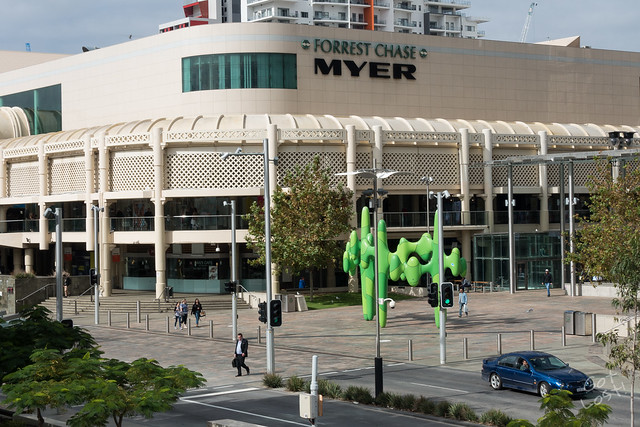 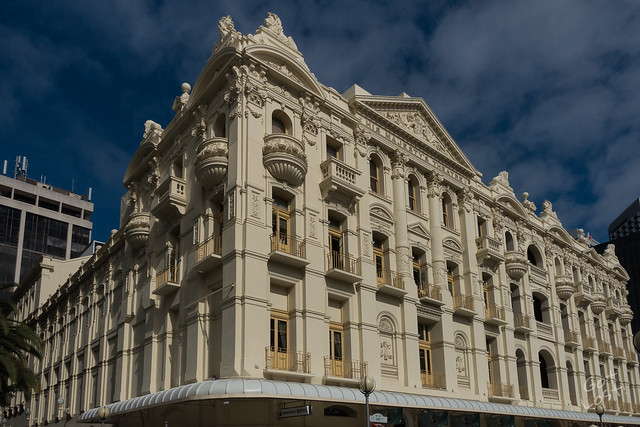 Then it was time to head to the Western Australia Museum. I’d heard good things about it and I’d seen they had an exhibit of 100 items from the British Museum on display. Since the British Museum is one of my favourite museums in the world, I thought it would be worth the trip.

Unfortunately most of the exhibits at the museum were close for refurbishment, so it was only the British Museum artifacts that were on display. It was a good display but I would have like to see the rest of the museum as well. It would have been good to find out more about the history of Western Australia and Perth.

That said the museum itself was interesting. Built within the colonial buildings of the old Perth Gaol, and amongst the Perth Cultural Centre which also included the Art Gallery and a few other historic buildings. It was a very interesting setup. I’ll have to go back when the museum is fully open.

It was good to explore. I should have taken a few more photos, but I was caught up wandering around and probably a little out of whack after an early start and long flight. Here is one photo that I did take from the courtyard of the museum. 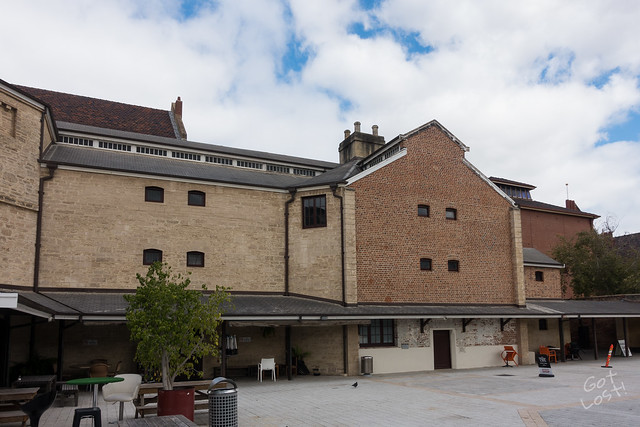 To find out more about the Western Australia Museum visit their website – http://museum.wa.gov.au/

After the museum I walked down to the river. I honestly thought there would be more going on around the river. But being the middle of day during the week was probably worst time to go down there. There was a lot of new construction going on at the time, I’d suggest the next time I’m in Perth there will be much more to see and do around Elizabeth Quay. It’s still a bit of a work in progress at the moment.

Unfortunately the clouds moved in and light was horrible. So while I took a couple of photos, I’d rather go back and take photos of the city, possibly even at night, to showcase the best of the city. Elizabeth Quay looks like it’ll be a buzz at night in the future. That will have to wait for another trip. 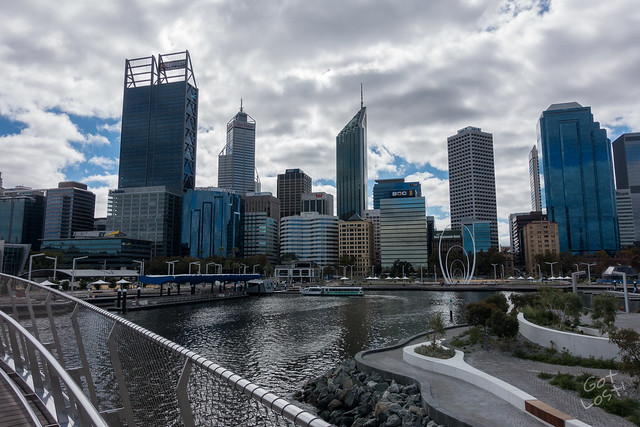 Next stop on the list was Cottesloe Beach. It was good to catch up with a couple of friends near the beach. I also took the opportunity to see the most famous beach in Perth. It would have been nice it the weather had played it’s part and I could have showcased the beach as the famous summer destination it truely is. That’s another thing that will have to wait until I visit again. It’s really nice beach, I’m sure it’ll be completely full of people during the summer. 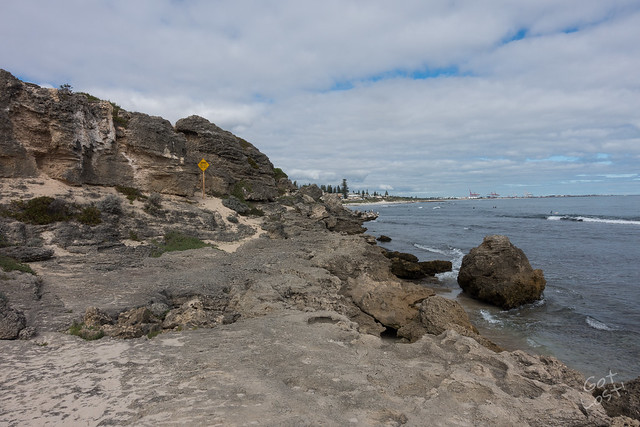 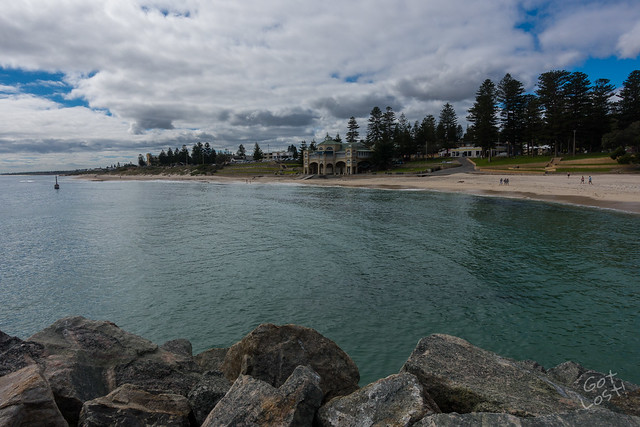 While the clouds inhibited some of my photo opportunities during the day, they were turned out to be great when I got to my accommodation at Scarborough Beach. Arriving just before the sunset, the sky came alive with colour. 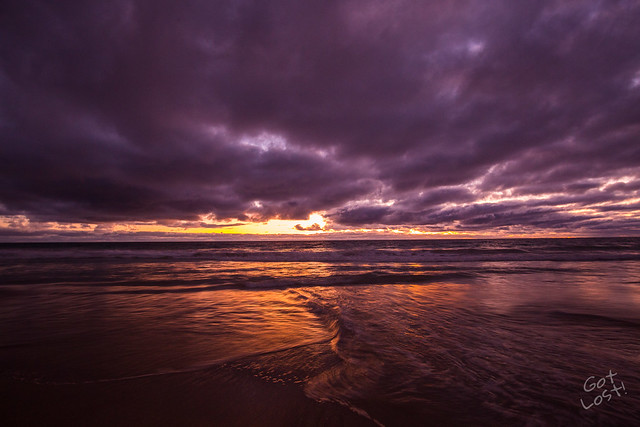 On my second day the weather had improved dramatically. I was up early with the 2 hour timezone change, so I took the opportunity to wander around Scarborough Beach. It was a good long walk along the beach to stretch the legs.

Also took the camera out and snapped a couple of photos that better showcased the stunning beaches in Western Australian. Scarborough is definitely one of my personal favourites. 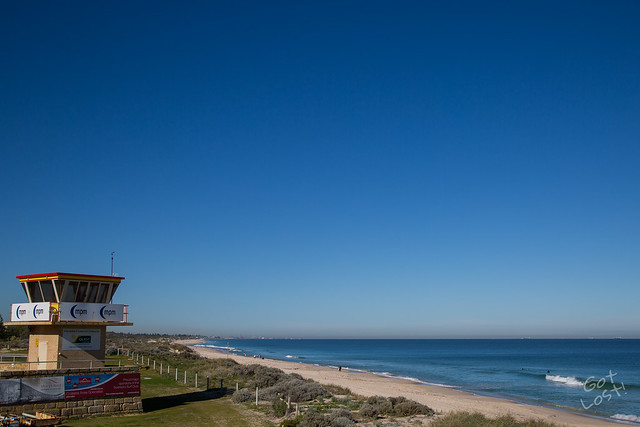 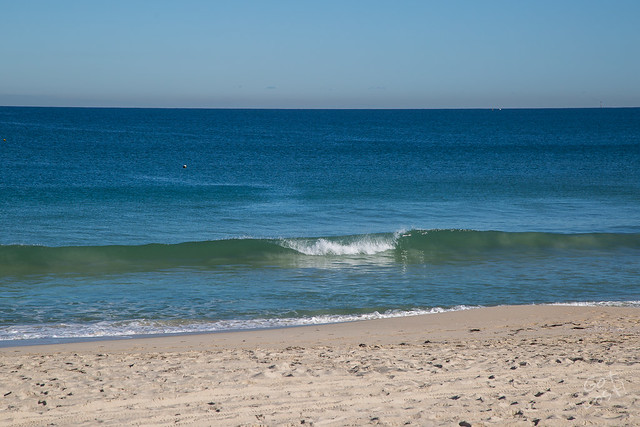 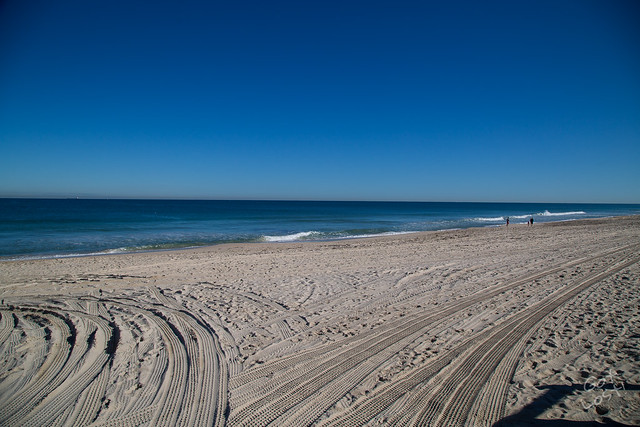 I had to head into the city for a meeting, but I managed to sneak on up to Kings Park to check out the view. It’s another one of those places I’d like to get to after dark and take some more photos of the city at night. I’m sure the city would look fantastic at night. 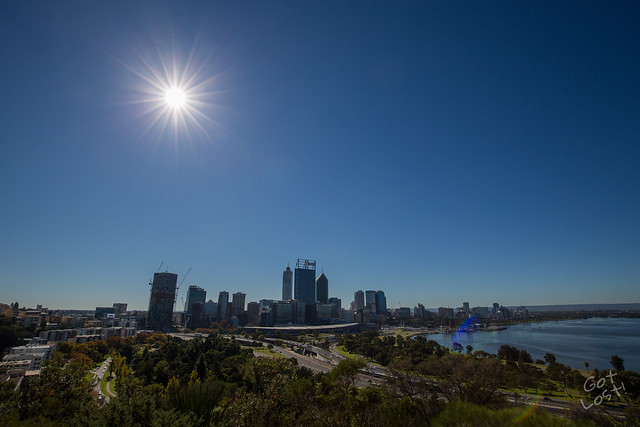 In the afternoon I managed to catch one more sunset. While it didn’t have the clouds popping like the previous night, catch the sun just as it popped over the horizon and disappearing into the ocean was amazing. I definitely need to photograph more sunrises and sunsets.

I took the opportunity to get a little bit creative, capturing a few different photos of the sunset. I’m not 100% sure which beach this is, but it’s just a short drive north of Scarborough. 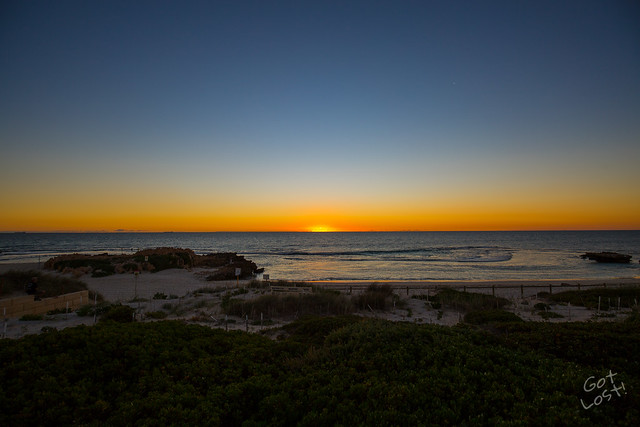 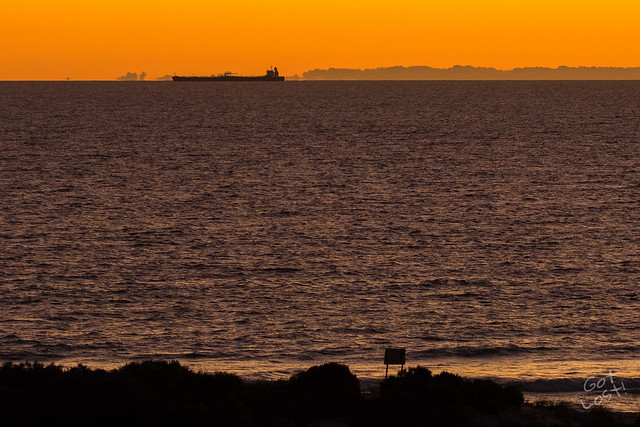 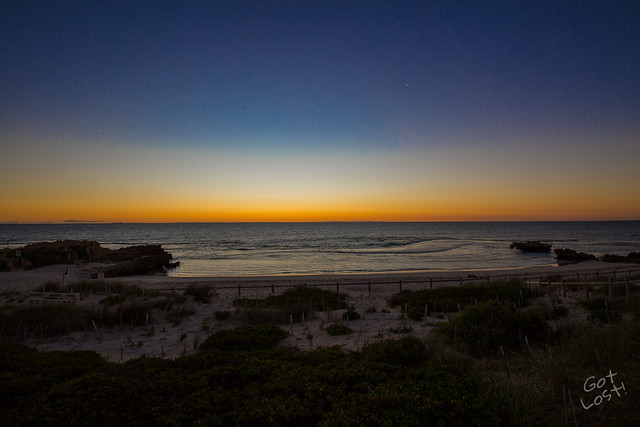 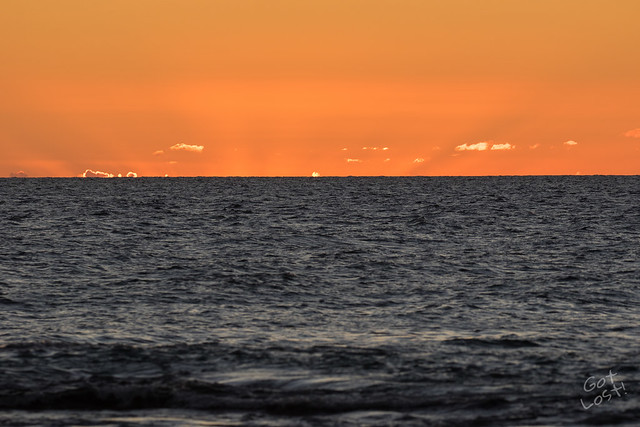 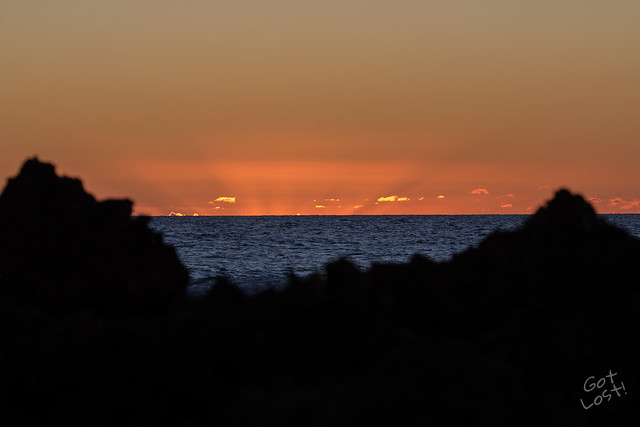 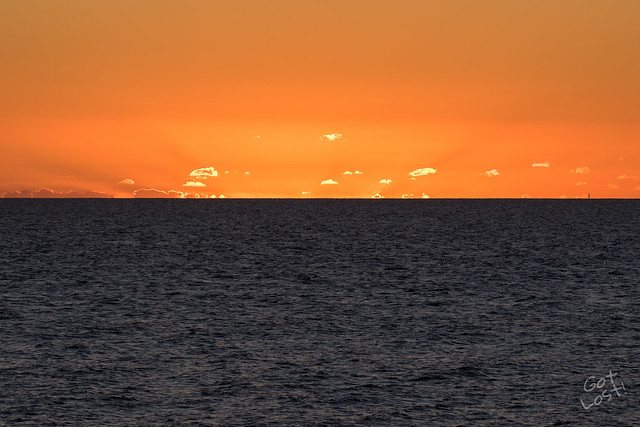 I also had an extra day in Perth, so I headed out to check out the Pinnacles. You can read all about it and check out the photos in this blog post.

Western Australia is one of those places that is so expansive, that the further I explore, the more I need to see. I’ll definitely have to go back and explore Shark Bay, Margaret River and Wave Rock. All for another time when I have some more time.

Have you been to the Perth before? Feel free to leave your suggestions or tips of your own in comment below so I can check them out next time I’m in Perth.

If you are looking for somewhere to stay in or around Perth, I stayed at Scarborough Beach. It’s about 20 minutes drive outside of the city but it’s a great place to stay right on the beach and catch the sunsets. There’s plenty of restaurants and cafes in the area and it’s not to far from the motorway if you’ve got a car. Heres a couple of accommodation recommendations in and around Scarborough Beach via Booking.com

If you’d like to see more of my tips for about Perth, check out these posts.